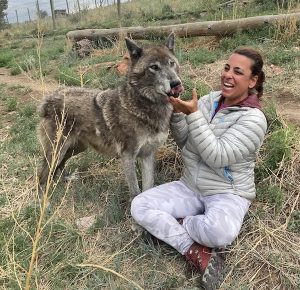 Ydun licks her lips after getting to know Sara at Mission: Wolf sanctuary.

I was French-kissed by a wolf. A true kiss. She stuck her tongue right into my mouth, investigating the entirety of it: gums, teeth, tongue, and the back of my throat. And while doing so, she stared right into my eyes.

It was a sign she liked me. Ydun (EE-dun), an Arctic Wolf-Timber Wolf mix, is a Wolf Ambassador at the Mission: Wolf sanctuary near Westcliff, Colorado.

I learned there that when wolves feel comfortable, they may use their tongue to learn who you are. It’s a greeting; A wolf “handshake” if you will.

“There is spiritual alchemy when you gaze into the eyes of the wolf,” ecologist and wild spiritualist Melissa Reed once told me. Her words would ring true weeks later in Connecticut, when I felt a connection to the divine and the wild presented through a cosmic coincidence with these wolves.

Hearing (and heeding) the call of the wild

My friend Sylvia and I visited Mission: Wolf as part of the Women Rising Wild Summer Solstice Retreat led by Melissa Reed in June. We gathered to meet and learn about the wolves, volunteer at the sanctuary, and partake in the flower and fire ceremonies at the retreat. During these sacred ceremonies, we would welcome the energies of warmness, openness, feminine compassion, and empathy, and then put them into practice when working with the wolves.

Sylvia and I — along with 11 women from across the country and an eight-week-old husky puppy with the bluest eyes — spent three days camping in the wilderness. We parked in a field of pine trees and low-lying grasses in rolling mountains. We camped in one of the darkest areas in the world with no light pollution and witnessed an incredible show of an enormous blanket of stars. Our campsite was near the 24 wolves residing at Mission: Wolf. The howling of the wolves in unison while we slept under the stars was some treat.

Mission: Wolf is a sanctuary for unwanted wolves, and now horses, who have spent their lives in captivity. Some are full-blooded wolves while others are wolf-dog hybrids, including pit bull breeds. Since 1988, the sanctuary has provided full care for over 125 wolves until the end of their lives. They educate the public about wolves to inspire stewardship for wolves. They also invite area ranchers to donate sick or dying animals (buffalo, alpaca, elk, cow, horse) for responsible, natural food sources.

Kent Weber, as well as Refuge Director Mike Gaarde, offered our group a more personalized experience with the wolves. Our group collectively gave good, calming vibes. Kent explained that women tend to look at the world with peripheral vision, feeling and intuiting their way through life, whereas men tend to look at the world with direct, focused vision, thinking their way through life. The former approach vibes well with the wolves. These energies of feeling and intuiting determine how well wolves thrive in their pack. If you approach the wolf in their way, they will respond more positively to you. 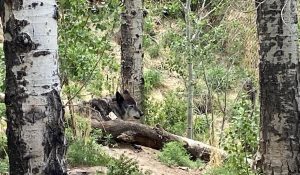 Sleeping under the stars within earshot of the night howling of Farrah and her pack was a powerful experience.

Kent introduced to us Farrah (left) and Apollo. As a puppy, Apollo had been adopted by someone who quickly realized that Apollo was a wolf, so he was surrendered him to the sanctuary. Farrah, Apollo’s wolf partner, is a Wolf Ambassador who we got to meet.

Upon seeing Farrah, I could feel my hands buzzing with electricity. At that point, I thought to offer some ceremonial tobacco toward Farrah’s direction. Right away, Farrah got up from where she was sitting and walked towards us, standing at the chain-linked fence. Then Farrah emitted some long hooooowwwwwwwls for a few minutes. That was so cool to witness! After she was done, Kent invited us inside her enclosure so Farrah could meet us, look into our eyes, and give us kisses.

Wolves seem to feel emotions deeply.  Kent explained that Rosie, who is in the neighboring enclosure to Apollo and Farrah, was grieving the loss of her brother. She had been aloof to both wolves and people since he passed. Melissa and Kent entered the enclosure to see Rosie. To our pleasant surprise, Rosie went over to them to greet them. It seemed that the feminine vibes from our group played a factor in this positive development for Rosie.

As the grand finale, Mike invited our group into Ydun’s enclosure. Ydun was so excited to see us. To temper her excitement though, we were to walk past her nonplussed. Once we sat, he would let her come greet us. She loved to give each of us kisses. We learned that these wolves’ mouths are sanitary because they eat quality meat and the veterinarians on site take great care of them.

As Ydun was staring into my eyes and French-kissing me – mind you, I didn’t realize I was not supposed to open my mouth, I was to show her only my teeth — a thought crossed my mind. My brain was saying, Here is a wolf who could bite my face off at any time. However, my heart felt her gentle, loving essence. At no time did Ydun show aggression or risky behavior.

Being kissed by these wolves must be one of the top experiences I ever had in my life. All of us were intimately graced by the presence of these beautiful wild souls.

After this wolf adventure and the rest of my trip through Colorado, South Dakota, and Wyoming, I made my way home to Connecticut. There I went to my enchanted forest and sacred place near Lake Zoar, part of the Housatonic River. 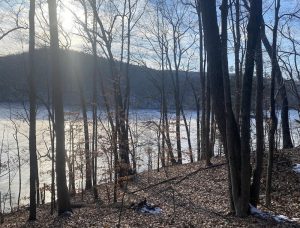 I grew up on the shores of this river, where I learned to swim and found my love of scuba diving. Over the years, I’ve hiked in this pristine forest — discovering, healing, meditating, toking, adventuring, training, guiding, and entertaining. I trained to summit Mount Kilimanjaro, the sacred rooftop of Africa standing 19,341 feet tall, in this place.

It’s also where I connect with the divine. I even manifested money on the trail. I took my Native American drum with me on the trail, drumming along the way and offering tobacco and cannabis (a sacred plant medicine) to a Native American Chief energy spirit. On my return, I found $17 lying at my feet on the trail.

Offerings are made, and reciprocated, in the enchanted forest.

It’s a special place. I took my energy healer, Ian Gelman, for a hike in my enchanted forest. Ian, who was trained by William “Big Toe” Wilcox of the Narragansett Nation in Rhode Island, felt a Native American presence there. He identified a “Chief” spirit that resides in the old Riverside Cemetery, near the entrance to the trail on Fiddlehead Road. A fiddlehead is the baby sprout of a fern, and it is how I saw Mama Ayahuasca present herself to me during one of my seven sacred ayahuasca ceremonies in the Peruvian Amazon Rainforest in 2020. I find it fitting that the road’s name is connected to Mama Ayahuasca, a plant spirit that means a great deal to me. (For more, see my Embolden Adventures YouTube series, The Ayahuasca Chronicles, which I’m following up with a book.)

I felt it, too, at the start of this year when Ian and I participated in a channeling session with White Buffalo Woman, a Native American spirit who instructed me to go west. Before I made that trip, Ian brought me to his favorite shop, Touch of Sedona. Inside the magical shop was a large Native American Chief statue, which had a curious, friendly energy about him. I was drawn to it and, at his feet, I found what was to become my Native American drum. 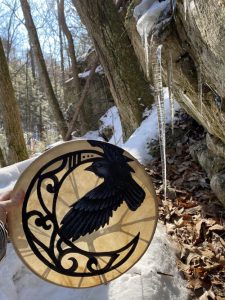 This drum has sounded in the east and west during Sara’s travels.

This drum accompanied me on my spiritual adventures in the west, including El Capitan in Yosemite, Monterey Bay (where I saw the rarest white dolphin), the ancient Redwood forests, the sacred Bear Butte in South Dakota, Devil’s Tower in Wyoming, and, of course, the wolves in Colorado.

I returned to my enchanted forest and the sacred river just a week after arriving back from Colorado. I felt called to go hiking there by myself. My first stop was the cemetery, where I made an offering of tobacco and Farrah’s wolf fur to the Chief spirit. Then, I hiked from the Fiddlehead Road trail entrance with my drum and made additional offerings of tobacco and wolf fur along the way.

Very recently, I learned that the Pootatucks communicated through drumming. They established a drumming network that carried a message over 200 miles in about two hours! It’s no wonder I am attracted to the enchanted forest with my drum.

I saw that an organized hiking event by the Oxford Land Trust at my enchanted forest was happening two days later after my hike. They were to celebrate a big win: Securing funding from the State of Connecticut and Town of Oxford to purchase 160 acres of land along the enchanted forest footprint. Now even more land in this area will be protected as the Nature Preserve.

I attended the celebratory hike and event, which included speeches by First Selectman of Oxford George Temple and the Connecticut Forest & Park Association, and a display of the efforts made over decades by The Oxford Land Trust to protect this land. 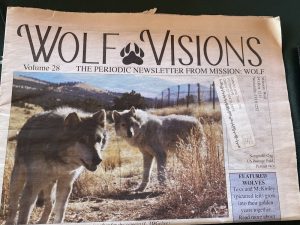 The Colorado wolfpack Sara met had visited her home town a few years before, to her surprise.

I peeked at their information and caught a glimpse of an old newspaper mailing titled, “Wolf Visions.” I stopped to read it more closely. To my surprise, I saw that it was sent to The Oxford Land Trust by Mission: Wolf! Random coincidence or cosmic connection?!

I could hardly contain myself and just had to tell everyone around me, even the First Selectman. This newspaper was dated 2018. And next to the newspaper was a photo album of a visit by the Wolf Ambassador, Rami to the children in Oxford, my hometown.

Melissa’s words stick with me: “There is spiritual alchemy when you gaze into the eyes of the wolf.” Sure enough, my experience with the divine and the wild at my enchanted forest and sacred river in my hometown has come full circle. It is the undeniable coincidence of the power of the divine. 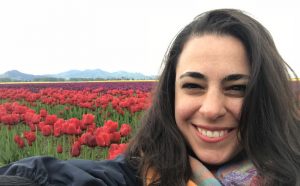 Sara Roccisano’s wanderlust for adventure and curiosity for spiritually transformative experiences is captured through Embolden Adventures. She left a successful 20-year career to write and speak about her travels, from scuba diving and hiking mountain peaks to visiting ancient megalithic structures around the world, participating in ayahuasca ceremonies in the rainforest, and learning the ways of Native American people.

PHOTOS courtesy of the author

Science on mysteries of human nature making strides, despite resistance