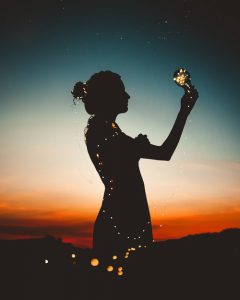 Scientists share their research on human phenomena at in-person and online events (scroll down). PHOTO LuizClas/Pexels

There’s a whirlwind of action happening on the frontiers of scientific research into phenomena of the human experience — but you’d never know it. Unless you are following the scientists or the organisations sharing their research, it’s pretty tough to learn about the body of evidence exploring the “what” and “how” of consciousness, telepathy, premonitions, dreaming, and life after death, to name a few.

Ask the scientific community conducting this research and they’ll tell you that the credibility bar is higher on these topics for both methodologies and outcomes than conventional topics — and so is the resistance to them by mainstream scientific community. It’s also harder to get research funded, published in journals and promoted at conferences.

Scientists at the forefront of exploring the everyday mysteries of human existence belong to such professional associations as Academy for the Advancement of Post-Material Science, Scientific & Medical Network, Institute of Noetic Sciences, Society for Psychical Research, Society for Scientific Exploration, and Parapsychological Association, among others. Their members are highly credentialed academics and researchers — from such institutions as University of Virginia, University of Arizona, Stanford University, University of Northampton, and Esalen Institute — who have thick skin. They are the underdogs of science who have made a case to mainstream science to be more open-minded; to not dismiss anything as “woo-woo” in the pursuit of scientific exploration because we don’t know what we don’t know.

So why the resistance?

It’s a very real and primal fear. The perceived risk involves losing professional standing, injuring their reputation, loss of job and income, and even relationships and home. That kind of fear, which tracks to basic needs in Maslow’s hierarchy of needs, is more than enough to keep people in the safe zone for research topics.

Research has demonstrated this fear.

The Galileo Commission, part of the Scientific & Medical Network, undertook original research to understand the professional perceptions and behaviours of scientists and academics on these topics surrounding mysteries of human experience. A loss of credibility to themselves or their employers was chosen by the largest group (80%) as a reason they do not pursue these topics for academic study or research, along with a lack of interest. The next most popular reasons (60%) were lack of knowledge of the topics and lack of funding.

Yet there are some who venture outside those safe bounds, and their numbers are growing, along with the evidence to support the existence of some energy outside the brain that interconnects us and nature. 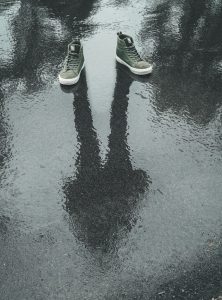 The scientific community is divided as to whether the brain creates individual consciousness or connects to an external consciousness. PHOTO Shane Kell/Pexels

A recent win was the September publication of a paper in Frontiers in Psychology, “What if consciousness is not an emergent property of the brain? Observational and empirical challenges to materialistic models.”

“Despite sophisticated physicalist theories of consciousness dependent on brain function, these examples apparently demonstrate non-local aspects of consciousness, perceiving information in a way that is not limited by our conventional understanding of time and space and that is not dependent on the brain function,” write authors Helané Wahbeh, Dean Radin, Cedric Cannard, and Arnaud Delorme.

While the content of the paper is significant, the fact that it was published by a mainstream journal may be more significant. It is a call to the scientific community to rethink the widely held assumption that the brain creates consciousness. This paradigm shift of thinking is akin to the theory of black holes in the 1920s. If scientists followed the theories of the day on paper, black holes would have been an impossibility. There must be room for exploration, rather than clinging to theories, the authors posit.

“Perhaps holding the hypothetical assumption that consciousness is fundamental and focusing on what we can learn about the mechanism, mediators, moderators, and practical applications of non-local consciousness will reveal novel areas to explore,” wrote the Institute of Noetic Science’s scientists.

Hopefully this call for more open-minded research will be embraced. The paper already has been read more than 96% of the other publications on Frontiers.

That’s the recent win. Now for a recent loss and a near-miss. 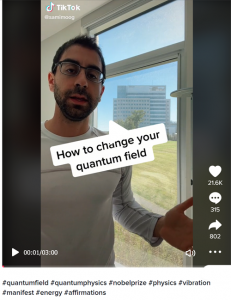 Research demonstrates that the mind can influence physical matter. Is meditation for manifestation a giant leap?

Today Stephen Harrison wrote about how content tagged #NobelPrize and #QuantumPhysics on TikTok garnered 207 million views, in the wake of the Nobel Prize for Physics being awarded to the scientists for “groundbreaking experiments using quantum states, where two particles behave like a single unit even when they are separated.” That’s an unusually high response to physics news, he wrote, because people like Sami Moog, who posts on the social media network on topics of astrology and manifestation, rode the hashtag to promote “quantum mysticism.”

“Hundreds of these ‘quantum’ science videos claim that quantum cosmology allows humans to literally teleport between different realities or communicate telepathically with their past and future selves,” Harrison wrote. He refers to Wikipedia as an authority, while neuroscientist and New York Times best-selling author Dr. Eben Alexander refers to Wikipedia as “pseudoscience.”

The concept of manifestation is trending across social media, books, podcasts, and all media and general conversation right now. Surely there will be opportunists angling for quick profits, as there are in all business sectors. But Moog may be selling what he — and millions of others through millennia — have experienced.

Is the gap between the Nobel Prize work to manifestation a great leap?

The science on this one, like other daily phenomena such as dreaming, may not have caught up fully with the human experience yet, but Harrison didn’t acknowledge any research that suggests the possibility exists. Quantum physicists are known to be open to psi research more than those in other disciplines.

Princeton University’s PEAR lab demonstrated that human intention affects the physical world. The project lasted 28 years, and the equipment has been preserved for public participation at the Wyrd Experience in England. And a 2015 article published in journal Global Advances in Health and Medicine, stated that there’s “well-accepted evidence for quantum nonlocality, which demonstrates the existence of ‘spooky action at a distance’ (as Einstein described it).” As for proof of past lives, there is a great body of work on reincarnation by the University of Virginia’s Division of Perceptual Studies, let alone the growing number of people experiencing regression and progression hypnotherapy to experience past and future lives.

Ironically, Harrison’s story appears within Slate’s FutureTense column, which is “a partnership of Slate, New America, and Arizona State University that examines emerging technologies, public policy, and society.” In fact, Arizona State University is wholly devoted to the power of mindfulness and the practice of meditation. ASU’s Center for Mindfulness, Compassion and Resilience sits within Edson College of Nursing and Health Innovation.

Generally, it’s tough to find balanced coverage of research on human phenomena in mainstream media. Much, like the Slate story, are coming from a point of view that is rather closed-off.

There are journalists who wish to cover this area, to the point that a few of them have created a “safe space” for like-minded journalists to gather resources and opportunities for more coverage. The Frontier Journalists’ Association* aims to make it easier for the media to cover legitimate science surrounding mysteries of human experience.

“Consciousness” was named the top area for future coverage by journalists surveyed by the FJN. Those journalists cite the barriers to coverage being a lack of credible sources of information, lack of understanding of the material, and lack of openness or support from editorial management. 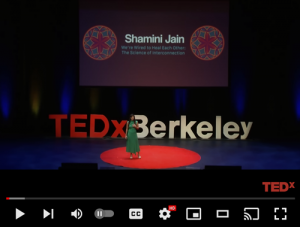 Dr. Jain was prohibited from using the word “Reiki,” in her April 2022 talk about interconnectedness and healing.

TED’s censorship of a TEDx Berkeley talk on the science of interconnection by Dr. Shamini Jain, who is a psychologist and scientist, plus founder and CEO of the Consciousness and Healing Initiative, a nonprofit collaborative accelerator that connects scientists, health practitioners, educators, and artists to help lead humanity to heal ourselves. Dr. Jain was invited to present by TEDxBerkeley. She was warned beforehand not to use the word “Reiki,” so she used “biofield healing.” After the talk was posted on YouTube, the TED organisation added a warning and deleted comments. Here are details of what went down.

So how can one sidestep the censorship?

Hear directly from the scientists

Participate in the research: Researchers often seek public input to their projects. If you participate, you will be informed as the project progresses. For mystical or telepathic experiences, visit IONS; for paranormal experiences, visit Society of Psychical Research; and to report phenomena among pets, visit Rupert Sheldrake’s website. 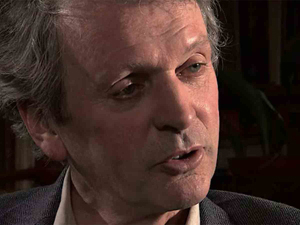 How to Transform the Sciences: Six Potential Breakthroughs
Online via Zoom | Six sessions, running 20 Oct.-14 Jan. £95
Independent scientist Rupert Sheldrake — whose research spans consciousness, morphic resonance and the seeming sixth sense of animals — presents his research on common yet mysterious phenomena in animal behaviour. This series covers that gamut of his work, from bird navigation to the secret of immortality. 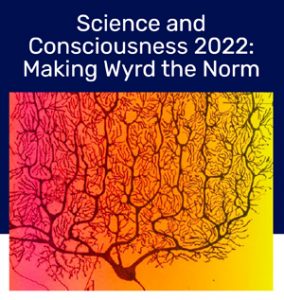 Science & Consciousness 2022: Making Wyrd the Norm
Skipton, England | 31 Oct.-4 Nov. Retreat rate is £499.
Perfectly timed around Halloween when the veil between worlds is thinnest, this is a residential course that can be taken for personal curiosity or to earn credits toward a university degree programme. The grand grounds of the Broughton Hall Estate, which include a labyrinth, will be overtaken by a slew of interdisciplinary experts on mystical, metaphysical and mysterious things. Participants can experience forest bathing and a psychomanteum, a tool used by Nostradamus to travel to the future; be part of a life Remote Perception experience to send and receive information from others outside of time and space; use technology developed at Princeton University that demonstrates the ability for one’s mind to influence the physical world; and to discuss how peoples’ fundamental interconnectedness can be a solution for the critical issues facing humanity and our planet today. 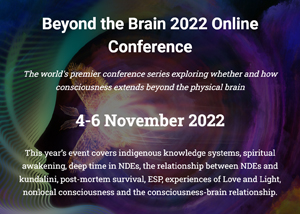 Beyond the Brain 2022
Online via Zoom | 4-6 Nov. Tickets start at £24.99.
This year’s event features the latest breakthroughs to understanding the mysteries of human consciousness. The focus is indigenous knowledge systems, spiritual awakening, deep time in Near-Death Experiences (NDEs), the relationship between NDEs and kundalini, post-mortem survival, ESP, experiences of Love and Light, nonlocal consciousness and the consciousness-brain relationship. Speakers include Dr. Eben Alexander, author of “Proof of Heaven: A Neurosurgeon’s Journey into the Afterlife“; Dr. Helané Wahbeh, a trance channeler and research director of the Institute of Noetic Sciences who discusses the 12 characteristics that make one’s Noetic Signature (intuitive capability); Ben Gross, a musician who leads singing circles and produces Wider Horizons, The Transformational Gathering in Nature for Young Adults; Mitch Horowitz, historian of alternative spirituality and author of “Occult America” and “Daydream Believer: Unlocking the Ultimate Power of Your Mind“; and Siegmar Gerken, founder of Core Evolution, speaks on on the in​ter​con​nec​ted​ness of psycho​so​mat​ic pro​cesses as they mani​fest on the levels of body, emo​tions, mind, will and con​scious​ness; among many others.

The call of the wild is full of affirming surprises